What Happened to October?!?

All right, troops. Would someone please explain to me where the entire freakin' month of October disappeared to? I mean, didn't I just do the book launch and signing thing at North by Northwest? How did an entire month go by so fast?

Seriously, this past month was a whirlwind. It started with a pro-level writing workshop here in town, where I helped teach every night after work. In the middle of the two-week workshop we had a very successful book launch, and at the end of the week a senior editor from my publisher came in as a guest instructor.

After which I collapsed - until my husband got sick, and then, well, see that last post about the glamour of the writing life!

One very cool thing happened just before the launch. I got a book release gift from a wonderful friend. Here's the explanation I emailed to our writers loop:

I just got the coolest, funnest "book release gift" ever! Last night Steve
showed up with a special gift from Cindie Geddes to celebrate the release of
SINK TRAP. She had arranged with him to pick up something she had ordered locally for me - and I was simply blown away.

Cindie, I have to say, this gift was unique and it made me laugh!!

What Steve presented me with on Cindie's behalf was a LARGE pipe wrench, which was pretty cool all by itself. But that wasn't all - she had managed to talk the local hardware store guys into engraving the release date for the book on the handle, and the name of my main character on the jaws!

Now, when I say a big wrench, I really mean it. Just look: 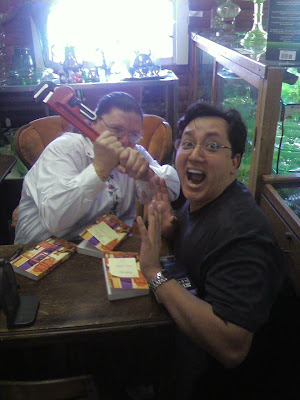 Is that totally cool, or what? The victim, er, student in the picture is Michael Bellomo. He wanted his picture taken with me and the wrench, and I really couldn't disappoint him, now could I? Somehow, I see another Georgie plot shaping up... Rest assured, Michael survived, and is now resting comfortably at home in California. He may even come back to Oregon. Someday.

And those books on the table? They have sticky notes on them because they were pre-ordered, which was a good thing, since Sheldon (McArthur, bookseller extraordinare) actually ran out of books and had to take backorders! Doesn't get much better than that.

Steve recovered from his flu, after sharing it with me, and I've recovered, too. There is news about LEAD PIPE CINCH (coming in April), and more maybe-news on the horizon. And maybe the next month won't disappear quite so fast.

Who am I kidding??

Christy
Posted by Chris at 6:23 PM 3 comments: Links to this post