Haven't got your copy of LEAD PIPE CINCH yet?  It's out there, and I've been hearing from readers who love it!  But just in case you need some tempting, here's the first chapter of Georgie's latest adventure: 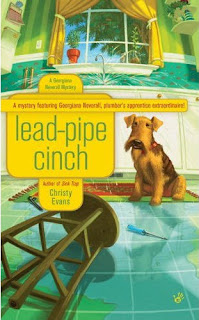 LEAD PIPE CINCH
Chapter 1
“Let’s get a move on, Neverall,” Sean Jacobs, the crew foreman, said as he gestured toward the muddy bottom of the trench. “The inspector’s due in an hour.”

Mud sucked at my boots as I slipped down the steep side of the troublesome McComb moat project, a shovel banging clumsily against my leg.

With permit hearings, never-ending inspections, and construction snafus, this job was fast becoming a plumber’s nightmare.

The drainpipe we buried last week had to be uncovered this week. As the apprentice, I got all the bottom-of-the-barrel jobs. Or in this case, bottom of the moat.

We were supposed to be done before the rain started, but this year summer limited itself to a few weeks of clear skies and temperatures in the high nineties. Now it was only October, and the Great North-wet was already living up to its nickname.

I bit back a curse as the mud squished beneath my weathered steel-toed boots. No swearing on the job. It was one of the rules my boss, Barry Hickey, insisted upon. Barry had a lot of rules.

I reached the muck at the bottom of the six-foot-deep trench and checked the marker stakes. Buried beneath fourteen inches of dirt—now mud—was the pipe in question. It had to be uncovered and inspected—again—before the concrete lining could be poured.

This close to the recently erected bridge piers, the power equipment was useless. With the piers in place there was no room for a power shovel to maneuver. All this job required was a strong back and a lot of stubborn.

Sean and I had reached a truce of sorts. Although he still didn’t believe a girl belonged on any kind of construction crew, after working together all summer I felt as though I was slowly earning his respect.

It was a familiar scenario. Several years in the boy’s club of Silicon Valley high tech had taught me how to adapt. When I left behind the Union Square wardrobe and the hundred-hour workweeks, I had come away with some hard-earned lessons.

Not to mention a ﬂattened bank account, a bruised ego, and a broken heart—all courtesy of some of the slimier boys in the club.

By comparison, the thick mud at the bottom of the moat felt clean.

I shifted another shovelful of ooze, depositing it behind me. Water, dark with the rich soil, ran back down into the hole I’d created, obscuring the bottom.

I moved along the width of the moat, carefully uncovering a narrow trench. We would have to pump it dry for the inspector, but at least the rain had stopped. With luck, we could get the approval we needed and re-bury the pipe before the skies opened up again. The concrete, fortunately, would be someone else’s problem.

Building a moat sounds simple. It’s nothing more than a ditch, dug in a circle instead of a straight line. It was the stuff that went inside that circle that was the problem.

Power lines, cables, water lines, drainpipes—all the modern conveniences had to be fed to the McComb’s castle—and had to run under the moat. It was one of the requirements of the permit. A local ordinance said underground utilities. That meant at least a foot of dirt over every pipe and cable, and we were sticking to the letter of the agreement.

It was a complex puzzle, feeding the latest technology to a state-of-the-art castle at the farthest reach of the grid. Three years ago, I would have been on the design team. As owner of Samurai Security, it was precisely the type of challenge I had looked for.

Instead I was up to my ankles in mud, dressed in stained coveralls and work boots. I was shoveling the muck, my hands protected by heavy leather gloves. I wore no jewelry, except a battered plastic wristwatch.

I was happier than I’d been in years.

Above me I heard a vehicle crunch to a stop on the gravel apron next to the bridge supports. I glanced at my watch with a sinking feeling. The inspector was half an hour early, and we were nowhere near ready.

“Hello, Mr. McComb,” I heard Sean say, and I breathed a silent sigh of relief.

Chad McComb, the eccentric millionaire who wanted a castle and was willing to pay for it, was a welcome visitor at the job site. A retired Microsoft engineer who’d been hired so early in Microsoft’s history that his employee number was rumored to be only two digits long, McComb treated the contractors and their crews well.

“Chad please, Sean.” I could hear the smile in McComb’s voice. “How’s the work going?”

Sean sighed. “Another blasted inspection. We’re getting ready to pump out the rainwater. Inspector should be here in a few minutes.”

“Won’t keep you, then. Let me know if you need anything.”

Footsteps rattled the boards over my head as McComb and a second person crossed the temporary bridge to the building site.

My heart did a little ﬂip at the mention of his name, and I shook my head, disgusted with myself. There must be thousands of Blakes in the world, and Blake Weston was ancient history. So why, after three years, did I still react to the mention of his name? Just because I was thinking of the boy’s club didn’t mean a member of it was going to magically appear, like some evil sorcerer conjured out of my thoughts.

But before I could lift another shovelful of mud, I heard a voice that took my breath away as though I had been punched in the solar plexus.

My veins were suddenly full of ice water. How could I be so sure, with only a single word? Maybe I just thought it sounded like my Blake. It had been three years, after all—just a coincidence.

Blake and McComb were looking at the building site in front of them, not at the muddy moat below, when I stepped away from the supports to look up.

I just had to look.

And I wished I hadn’t.

The proﬁle, the slick dark hair, the conﬁdent bearing, were all instantly familiar. It wasn’t the power of suggestion, or a sound-alike, or some evil magic. It was Blake Weston.

I ducked back under the temporary bridge, forcing my attention back to the job at hand. With luck, I could stay in the moat, hidden from sight, until Blake and McComb left.

I strained to listen to their conversation, but they had moved away from the bridge.

“Ready for the pump?” Sean called down.

I froze, waiting for him to call me “Neverall,” and reveal my presence to the last person on earth I wanted to see. But for once he didn’t.

“Yep,” I called back, pitching my voice low, and hoping it wouldn’t carry.

On the other hand, would Blake even recognize my voice? If he didn’t, I wasn’t sure whether I would be relieved or insulted. But the two men gave no indication they had heard our exchange.

A few minutes later, their footsteps mufﬂed by the rhythmic thumping of the pump, Blake and McComb passed back across the temporary bridge and walked through the gravel.

Unable to resist, I clambered a few feet up the side of the moat, peeking over the rim of the trench. I had to conﬁrm what I already knew.

One glance was all it took.

The ﬁrst thing I saw from that vantage point was a pair of hand-stitched Italian loafers, now speckled with mud from their owner’s trek through the construction site.

How appropriate. Blake Weston would never wear sneakers or work boots, even on a muddy construction site.

I hoped it was the last I would see of those despised loafers.