A Problem in the Pipes - "Sink Trap," Chapter 1 (continued) 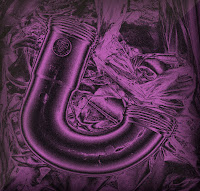 Here's the rest of the chapter. I hope you'll enjoy it enough to want to pre-order the whole book, which you can do HERE. And, yes, there will be a Kindle version for you early adopters. Just follow the "other editions" link from the page that link takes you to on Amazon.

The inspection of the Tepper warehouse hadn’t gone well. So far, we’d discovered one restroom with some serious leaks, and a stopped-up utility sink.

Fortunately for me, clogged pipes are easier to diagnose than leaks, so Barry took the bathroom and I got the sink.

But on this job, nothing turned out to be simple. I’d struggled with a plumber’s snake for twenty minutes before I gave up, grabbed my tools, and crawled under the sink where my mother had found me.

Plumbers, in my limited experience, spent an inordinate amount of time under sinks. Or under houses. I’d take the sink any day.

From my cramped quarters back under the sink, I heard familiar footsteps echo through the empty warehouse. Over my shoulder I saw the worn steel-toe boots of my boss, Barry Hickey.

Lately, I identified everyone by their shoes.

“Hand me that work light, would you, Bear? I can hardly see what I’m doing under here.” The nickname fit his stocky frame and brown hair, though I didn’t use it often. It seemed a little too familiar.

But sometimes Barry felt more like the older brother I never had than my boss. And it didn’t hurt our budding friendship that I made the office computers do tricks he didn’t think possible.

Barry thrust the small round light under the counter, into my outstretched palm. “Getting late,” he said. “I’m done with that bathroom for now. We could knock off for the night, come back in the morning when you can see what you’re doing.”

I wiggled further under the sink and grabbed the wrench handle with my leather-gloved hands. I tightened the jaws around the connecting ring of the drain pipe, digging into seventy year’s accumulation of unidentifiable corrosion.

“I can see,” I protested. “Besides, another five minutes, I swear, and I’ll be done under here.” I grunted as I pushed against the wrench, my reward a scant inch of movement.

“And we can’t come back tomorrow,” I continued, as I braced myself for another push. “We have to do the walk-through on the Tepper house.”

The two properties were both owned by Martha Tepper, a retired librarian who’d left town a couple weeks back. I’d heard she was tired of Oregon winters and wanted someplace with sunshine.

I think she went to Arizona, though I wasn’t sure. I hadn’t seen much of her since I left for college, but I remembered her from summer vacations when I camped out in the mystery section of the library.

Now my mother and Gregory were working with Rick and Rachel Gladstone, Martha’s attorneys, on a deal for both properties.

“You promised Sandra it’d be done, and she wants to get back to the Gladstones before the end of the week.”

The wrench moved again. The pipes in the warehouse were old, but I had the right tools and a whole lot of stubborn.

“Sandra?” A disapproving tone crept into my boss’s voice. “Georgiana, she’s your mother.”

It bugged Barry when I called my mom by her first name, but it was one way I kept my personal and private lives separate. And as long as Hickey & Hickey worked for Whitlock Estates Realty, I needed that separation.

I’d already messed that up once today, talking to Sandra herself. I wasn’t going to do it again.

“She is. When I’m at her house for Sunday dinner or we’re visiting her sister in Sweet Home. Not when she’s paying for a job, Barry. Then she’s Sandra. Or would you rather I called her Mrs. Neverall?”

Barry’s feet moved away, out of my line of sight. He paced across the dirty concrete floor of the warehouse.

I herked on the wrench one more time and the connector ring broke free. A couple good turns and I was able to put the wrench down and turn the coupling by hand.

The stubborn joint came free, releasing the end of the outlet pipe. A gush of stagnant water ran into the waiting plastic bucket. Judging by the stench, that water had been sitting in the pipe for a long time.

I dropped the rusty coupling in the bucket and wormed my way back out from under the sink.

“You know, Barry, you didn’t put ‘contortionist’ on the job description.” I reached back in for the work light and played the illumination over the end of the pipe to be sure the flow of stinky water stopped before I moved the bucket.

Barry chuckled. “You’re the girl who wanted to be a plumber,” he said.

“Woman, Barry. Woman. Your daughter is a girl. Maybe. But I am not a ‘girl.’ Haven’t been for years.” I reached under the sink to retrieve the bucket.

I glanced up, shaking my head. “Not so much anymore, Barry. She might tolerate you calling her that right now, but not for much longer.”

Through the high windows of the warehouse, the sky was nearly dark. I let go of the bucket and pulled back the cuff of my leather glove to glance at the scratched plastic bezel of my dime-store watch. I had learned the hard way never to wear a good watch when messing with pipes.

Nearly seven. How did it get so late? I was late for dinner with Wade.

I bit back a curse. Barry tolerated a lot from me, but one of his rules was no cursing in front of customers, which had morphed into no cursing on the job. Never mind that there wasn’t anyone in the building but the two of us, or that he was probably the only construction-trade guy in the country who didn’t swear a blue streak. It was still a rule.

The bucket stuck and I put my head back under the sink to see what the problem was, shining the light on the exposed pipe ends.

Something bright caught my eye. Given the condition of those pipes, there shouldn’t be anything bright under that sink.

But not bright and shiny.

I poked one gloved finger into the pipe, but the thick leather didn’t fit in the tight opening. I pulled the glove off, reached for the pipe, then reconsidered.

I had no idea what I was reaching for.

I grabbed a close-fitting latex glove from my pocket, stretched it over my hand, and reached back under the sink.

It was a lump of metal and stone, large enough to block most of the pipe. It should have been too large to have fallen down the drain, except the drain guard had rusted through, probably years ago.

The piece was lodged crosswise, and I pried it loose with my finger. It popped out of the pipe and landed in the bucket with a plop.

Curious, I fished it out.

It was a brooch. A very distinctive brooch, and one I thought I recognized. Martha Tepper, the retired librarian who was supposed to be in Arizona, had worn it every day, the same way a happily-married woman always wears her wedding band. If it was the brooch I remembered, she never went anywhere without it. So why was the librarian’s favorite accessory sitting in a glop of plumbing goo in my hand?

After being lodged in the drain pipe of an empty warehouse in Pine Ridge, Oregon?

And what was I going to do about it?