I'm home, but I'm still thinking about my trip to Malice Domestic.  The conference was wonderful, and I'll have more to say about that as time goes on. but for now I want to write a love letter to the city of Washington, DC.  I had an amazing visit to your city, and I can't wait to come back.
The last year has been tough; probably tougher on my mother than any of the rest of us.  So when I knew I was going to visit Washington, I invited her to join me.  She'd never traveled east of Chicago, and she had talked about wanting to see our nation's capital.

As luck would have it, my sister was able to go with us.  And here we are, our first day in Washington, getting ready to leave our hotel and explore the city.  If you can't guess, that's Mom on the right, and my sister Jeri on the left in the picture below.

My mom was pretty cool the whole time we were there.  We went all over the city, took the Metro to lots of places, and walked miles and miles.  There were times we moved a little slower, or stopped more often, but it was worth every pause and every stop. 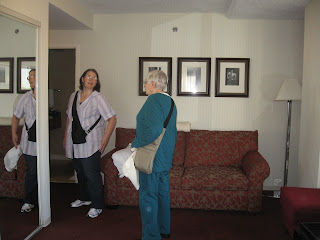 Jeri tried to get us a tour of the White House, which we didn't get, but she did get us a Capitol tour through her Congresscritter.  There was so much to see, we could have spent several more hours - or days - just on the Capitol, and not have seen it all.

What did we see?  First, we arranged a two-day pass on the Old Town Trolley, a great way to get an overview of the city.

We started by taking Metro from our hotel is Bethesda (the site of Malice Domestic), to downtown Washington.  That first day we hadn't figured out the elevator system on Metro, and we took the scariest escalator I have ever seen.  The ride went on forever, and Jeri said she wondered if some guy in red was going to show up with a pitchfork at the bottom. 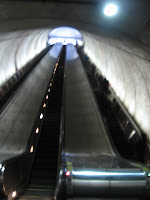 ﻿
Think I'm kidding?  Here's what it looked like from the bottom.  The picture's a little shaky, probably because I was having trouble getting the whole thing in the viewfinder!  According to Wikipedia, the escalator is 475 feet long, the second longest in the Western Hemisphere.  The longest? 508 feet, near the other end of the Metro Red Line.

Metro took us into downtown, where we walked a few blocks and found the Trolley station.  We hopped on their Green Line (apparently color-coding is big in DC) and saw the northern loop, through Georgetown, past Embassy Row, past the National Zoo, and the National Cathedral, under Dupont Circle, and back to our starting point. 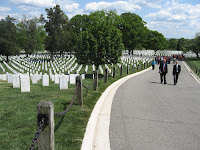 We grabbed a quick lunch and then got on the Orange Line to continue our tour.  We rode as far as the Lincoln Memorial stop and transferred to the Red Line for the trip out to Arlington National Cemetery.  The picture on the right is a tiny portion of the headstones that commemorate our veterans and their families.  The dates span centuries, representing the sacrifice of members of all branches of the armed services. 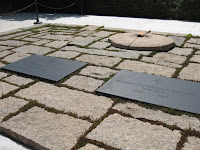 For those of us of "a certain age," November 22, 1963, is engraved in our memories.  We can tell you, in exacting detail, where we were and what we were doing at the moment we heard our President had been shot, and where and how we learned he had died of his wounds.  The image of his widow in a blood-spattered pink suit will never leave us, nor will the picture of his young son saluting the coffin of his fallen father.  For us, the Eternal Flame burning at the President's grave is a symbol of our lost innocence.

There are other graves at Arlington, too.  Supreme Court justices, conservative and liberal alike, rest together for eternity, along with lawmakers, explorers, statesmen, and more.

We returned from our somber journey to the most iconic of Washington monuments: the Lincoln Memorial, and the rest of the Mall.  I have more pictures and more to say, but that's for another post.

The final monument for our first day, however, was the one that came closest to home for the three of us.  The World War II Memorial.  My dad, my mother's husband of 64 years, served in the South Pacific as a young man.  He enlisted while still in his teens, and came back as a grown man.  As with so many men of his generation, the war defined much of who, and what, he was.  For many years he didn't talk about it.  Just like lots of his fellow servicemen.  They did their job, and then they came home and tried to put it behind them.  Only in their later years did they tell their families of the things they had seen, and experienced.  This beautiful memorial is a small tribute to their contributions.

More pictures and adventures to come, including a conference report.  But for now I just want to say "Thank you" to Washington DC and its citizens for giving us a wonderful visit, and memories that we will carry with us forever.