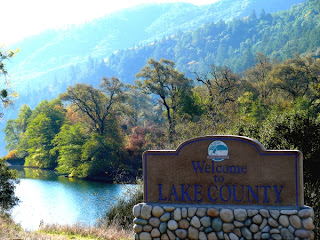 Introduction:  I recently passed a milestone birthday, one of those numbers that as a child seems so impossibly large that you never expect to get there.  It came at the end of two years of personal disaster (see this post for an explanation, if you haven't already read it), and at a time when I desperately needed something good in my life.  I tossed around a lot of ideas of how to celebrate surviving the last year (lots of hospital time was involved) and making it to my birthday.  Finally, my husband and I decided to go see the Redwoods.  We had driven through several times, but always on the way to somewhere else.  This time, we would just head south and see what we could see.  We did some searching, settled on a few (very few!) priorities, and started making plans.  Somewhere along the way, we discovered a cool resort south and east of the big trees, where every "room" was a converted caboose, and decided that would be fun and unusual, exactly what we were looking for.

These posts are my daily reports of our trip: the things we saw, the places we went, and the people we met as we drove approximately 1,500 miles in the course of six days, and had an adventure.  I tried to write down my impressions each night before bed, or over my first cup of coffee in the morning.  I wanted the memories to be fresh, undiluted by another day or days of travel and experiences.  I can only hope you enjoy reading them a fraction as much as I enjoyed living them.  (In case you missed them, here are links to Day One, Day Two-Part One, and Day Two-Part Two.) 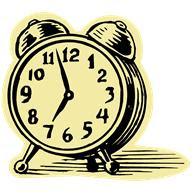 Somehow, on the days I don't have to get up early I wake up even earlier than usual.  This morning, for instance, I woke up, realized it was bright and sunny outside, and was immediately worried we had slept right through breakfast.  I looked at the clock.

Even though I am not a morning person, it was well worth getting up for breakfast.  I made it over to the lobby of Featherbed Railroad a little before 9:30, and met Tony Barthel, my host.  Tony, I have to point out, is a great guy and super friendly.  Breakfast was wonderful.  German Apple Pancakes, chicken/spinach/fontina sausage, good coffee and juice.  Cece brought us each a plate with a large sausage, and a soufflé dish full of a delightful custardy base topped with thickly-sliced apples and a light, buttery glaze on top.  Yummy, and more than we could finish, more’s the pity!

I should have taken a picture of the Pancake, just to torture y'all!  Instead, you'll just have to stay with Tony and Peggy, and see for yourself.

We came back and picked up a little - Tony and his crew will take good care of you, but they won't come in your caboose unless you ask.  We didn't need much, so we made our own bed and enjoyed the feeling of complete privacy.

Reasted and very well-fed, we got in the car for a tour of the area.  We drove around Clear Lake, taking several hours to explore the small towns along the way.  As much as we could, we stuck to the back roads that clung to the lakeshore instead of the faster, less scenic highway.  I have no idea how many actual miles we covered, but the trip took about five hours.  Those little squiggly lines on the map?  Those are the roads we took; those, and a few that I don't think are even on this map! 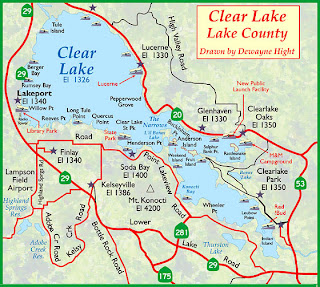 (Fishing, by  the way, is an important part of Lake County recreation.  My thanks to rbbassfishing.net for the map of the lake.)

In Lower Lake we found what claims to be the smallest jail in the United States.  Built in 1876 by local stonemason Stephen Nicolai out of locally quarried stone, the tiny building is on Main Street.

We saw fantastic views of the lake and the surrounding area, hills covered with grape vines (this is wine country after all), tiny towns that had been here for many years, and generally cool stuff everywhere we went.

Lake County is home to many wineries.  Although we didn't go for tasting this trip, the views as we drove through the acres and acres of grape vines were spectacular.

Lakeport, on the west side of Clear Lake, is a beautiful small town with several historic buildings and a gorgeous park on the lakefront.  We stopped there for a few minutes, admiring the view, watching a harvest operation clearing some kind of plants out of the water, and admiring the beautiful Carnegie Library building that sits next to the park.  The result Andrew Carnegie's philanthropy, Carnegie libraries were built across the country in the late 19th and early 20th century, and are exquisite example of the architecture of the period.


We had a wonderful time, and arrived back at the B&B ready to relax for a while.  We watched squirrels race around the lawn in front of our caboose (Caboose!) and sat on the porch of the main building for a long while, talking with Tony, our host.  Eventually Peggy got home, they headed off for dinner with friends, and we wandered back to our temporary home.


I worked and read for a little while, and Steve flaked out and took a nap.

By the time he woke up, we needed to get some dinner, which wasn't as easy as it sounds.  Lake County's population is small, about 65,000, spread over more than 1,300 square miles.  The biggest town, on the opposite side of the lake from us, is about 14,000 - so not a place for all-night dining or late-night entertainment.  We didn't go out until after 8, a bad mistake when looking for food.  We ended up with Taco Bell again, then home for a soak and some quiet time.

Tomorrow: More exploration, and the Highway that led to wine!
Posted by Chris at 1:36 PM