Panhandling: Murder and Mayhem On the North Florida Coast 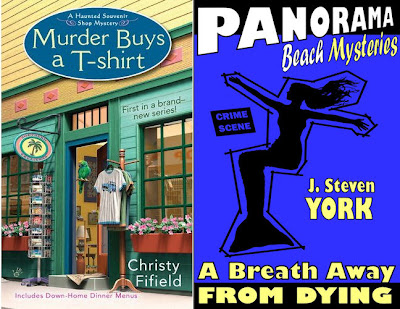 Christy's Husband and Number 1 fan, Steve York here.  You know that Christy writes mystery, of course (thus the name of the site, duh!), but I've been writing professionally even longer than she has.  Even though my roots are in fantasy and science fiction, I've always enjoyed mystery.  Recently I've also taken to writing the stuff, with my Panorama Beach mystery series, and discovered to my surprise that I like it quite a lot.  Which brings me to today's subject...

I'd like to share with you one of those things that can only happen in a two-writer household.  Christy and I are not at all secretive about our work.  We talk about what we're doing all the time, have collaborated on several short stories and science fiction books, and even on our solo projects we often brainstorm together.  But that doesn't mean we always think about what the other person is doing in the context of what we're doing.  We just each write what we want to write, and stuff like this happens.

What this?  Well, Christy and I are now going to kind of interview each other and let you listen in...

STEVE: Seriously, I had no idea it was going on, and I can't even tell you for sure which one of us started first, but I can very distinctly remember the moment, and it was probably after I'd finished my first Panorama Beach installment and you'd finished "Murder Buys a T-Shirt," when I looked up and realized, "hey, both of us are writing mystery series set in the Florida panhandle, in fictional towns on the Gulf Coast."

In fact, if you tried to place our fictional places on a map, they'd probably only be about thirty miles apart, with Keyhole Bay being west of Panorama Beach.  Who did go first, and do you have an idea how this happened?

CHRISTY: Well, since I sold the Haunted Gift Shop series back in 2010, I think I actually started the North Florida mysteries, but it goes back a lot farther than that for both of us. I fell in love with the area the first time we went there, more than 25 years ago.

From that first time I visited North Florida I wanted to write about it.  You took me to see DeFuniak Springs, an incredibly photogenic small town which was an important part of the Chautauqua movement in Florida.  Situated on a perfectly-round lake, it is a beautiful small town, steeped in history.  I could imagine turn-of-the-century ladies in ornate hats and walking suits, being courted by gentlemen in starched collars and spats.

And you've got some deep roots in North Florida, correct?

STEVE: Well, I've always had a nostalgic connection to the place.  When I was a kid, Panama City Beach was the place to go in the summer.  It was a little bit of Disneyland, Oz, and paradise all rolled into one.  In retrospect it was all a bit tacky and cheap, but the beaches were breathtakingly beautiful, the water was warm, and I'll never forget the fun I had with my family there.

Now, I always knew there was some kind of family connection to the inland part of the Florida panhandle.  When I was young we visited a graveyard where some family was buried, extended relatives who lived back in the woods there, and an abandoned cabin where family once lived.  But none of it really sank in, and I didn't realize On a more recent visit we hit some of those places again, but the significance of it still escaped me.

It's only recently, as I've been researching the Panorama Beach Mysteries, that I've discovered how deep that connection was.  Turns out my mom's side of the family comes from Scottish settlers who arrived in the area in the 1820s.  But I've got even older roots than that.  One of the men in my line married a woman of the local Euchee (Yuchi) native tribe, who had befriended the Scots, and that area north of Panama City, along the banks of the Choctawhatchee, had been their home since well back into the 1700s.  So it's ironic that, well before figuring this out, I'd decided that my fictional Panorama Beach deputy would be from a place in the piney woods inspired by those childhood visits, and decided that he was going to have roots there going back into the 1700s.

Speaking of Florida history, you mentioned the Chautauqua circuit.  Most people probably don't know what it is.  Even being from the area, I'd never heard of it until we prowled around DeFuniak Springs together.  Care to explain?

CHRISTY: Chautauqua was an adult educational movement that started shortly after the Civil War.  They brought speakers, musicians, entertainers, and educators to rural communities across the country.  The first Chautauqua was located in New York, on the shores of Chautauqua Lake.  "Daughter" locations grew up around the country, following the pattern established in New York, and Florida was the first of those.

I was aware of the movement, though I didn't know a lot about it.  And now that you ask that question, I went searching for more information.  There's an overview of DeFuniak history at SouthernTravelNews, which includes information on the Chautauqua, and pictures of DeFuniak(such as this one of the Chautauqua Hall of Brotherhood).

You have to remember, this was at a time when many small, rural towns didn't have much in the way of entertainment - unless you count a saloon or pool hall - and there were no movie theaters, no radio, no television, no telephones.  The chance to hear a popular speaker (like William Jennings Bryan or "Fighting Bob" La Follette), see an opera singer, or listen to a traveling orchestra, was a real treat in these communities.

And DeFuniak was a popular tourist destination at the time.  It retains a lot of that 19th century charm.

But there are a lot of other places in North Florida.  You mentioned Panama City Beach, which shares a lot in common with your fictional Panorama Beach.  Care to elaborate?

STEVE: So Chautauqua was like the proto-internet, trying to bring information, education, culture to every part of the country?  Cool.

Anyway, there are a lot of reasons that what we're writing is similar, but there are just as many in which it is different.  One of the biggest differences is that what your Haunted Souvenir Shop mysteries are contemporary, and my Panorama Beach mysteries are historical (though I die a little inside every time I call something that happened in my lifetime "historical!").

They're currently set in 1967, which is the golden-age of my childhood, and pretty much the golden-age for Panama City Beach and that whole part of the coast.  The beaches were still beautiful and accessible, and the beach was experiencing a boom in the building of wild and colorful attractions to bring tourist families to town.  The first major roller-coaster in Florida was in PCB.  There were amazing miniature golf courses with folk-art concrete dragons, monsters, and dinosaurs, there was a Swiss sky-ride, there were two-different trains leading back to two-different old-west towns hidden back in the inland scrub-brush, there was a gigantic fake volcano that spit fire at night, and a knock-off of Seattle's Space Needle   To my memory, it was a shining age, and it was brief, probably only about ten years.

You go to Panama City Beach now, and almost all those attractions are gone, and so is the Gulf, screened off by a near-continuous wall of high-rise condos that blot out the view, and even the sun.  The other side of the beach road is shopping malls and tattoo parlors.  The family-vacation trade has largely been pushed out by a hard-drinking, hard partying, "Girls Gone Wild," spring-break culture.

So while Panorama Beach is a series of murder mystery stories, on the larger scale, it's my attempt to tell a mythological version of that transition on the Gulf Coast.  If you've ever read the work of Carl Hiaasen, he writes in the landscape of a corrupted and despoiled Florida.  I'm telling the story of how that corruption came to be.  It's fictional, but it's the essence of a lot of things that really happened, or at least, could have.  More than once already I've made something up out of whole cloth, and somebody, often my mom, will come along and say, "I've heard that's a lot closer to truth than you think."

NEXT: Christy and Steve talk about writing in real places vs. fictional towns.