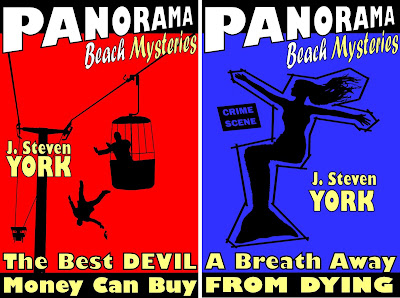 STEVE: One thing our two mystery series (The Haunted Souvenir Shop, and Panorama Beach Mysteries) have in common, other than being set in the same region of north Florida, is that they're both set in fictional cities, mine in Panorama Beach itself, and the environs of fiction Pascua County, Florida, yours in the town of Keyhole Bay, just a bit further west on the coast.

There are a lot of reasons to write a fictional place, and I wonder if the reasons we did it were the same, or very different.

For my part, I'm writing about fairly recent history, and an area with a fairly small population.  I wasn't trying to write an expose or a literal history.  My initial intent was just to see all those crazy attractions, the fake volcanoes, the concrete dinosaurs, the space-age observation towers, the amusement park midways, and create a mythology of where they came from, and where they went.  But my myth kept trending back towards the truth.  Maybe a bigger, grander, more colorful version of the truth, but real things that happened in Florida and the south back in those days, some I experienced, some I only heard about later, but all, in spirit derived from some kind of truth.

There are even times when you can be more truthful in some way, because you don't have to worry about being sued by real people.  I'm careful to remind people that while sometimes the events I write about have truth to them, the people, relationships, and circumstances are completely fictional.

So, what's your reason for creating Keyhole Bay? 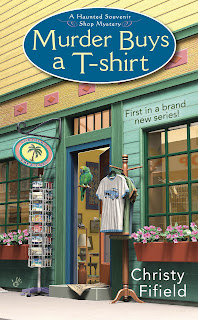 CHRISTY: My reasons and experience are both the same and different.  I do agree that it's nice not to worry about being sued, especially when you have dead bodies piling up!  But I had other reasons, as well.

In many of my previous books I have used real locations, especially in my two Alias novels where I had scenes in places as remote as the Blue Desert in the Sinai, a Russian apartment building, and Deadhorse, Alaska.  My gratitude for travelers who posted reports and photos on the net is extreme.  Doing that research, however, made me realize how complicated using a real setting can be.

The Haunted Gift Shop series, along with the previous Lady Plumber series, require an intimate connection with the location.  I have to know the location of each and every business, the streets and highways, the kinds of houses and neighborhoods, the population demographics - just tons of details.  Of course, every story requires at least some of that knowledge, but these stories are very localized, and the small towns where they are set are almost another character.

In developing the fictional city of Keyhole Bay, I have control of all those elements, but I am still constrained by the limits of probability.  For instance, I can't have snow storms, but I can have hurricanes, and summer heat.

What restrictions have you discovered in creating your fictional setting?

STEVE:  Well, I think you've hit on something when you say the location is also a character.  I feel very much that way about Panorama Beach, and I think that for a smaller locale anyway, that works better when you fictionalize the place.  With a major city like New York or Chicago or Las Vegas it's fine, because nobody knows everything about them, or expects to.  There are a million untold stories there, and even a local can easily accept that the story you're telling about the city is just one of those.  But you could study a small place like Defuniak Springs or Panama City Beach and know, if not everything, then most of the major stuff about it, and I'm sure there are people with that level of knowledge.

It's also like writing a non-fiction novel about a real person.  You never really know what their most private experiences and inner thoughts are.  You can speculate.  You can go on what they're chosen to share of themselves.  But on some level you have to speculate, just start making things up, or simply have to string the facts of their life together without really being certain how or why those things happened.  But when you make up a fictional character based on a real person, for example the character Charles Foster Kane in the movie "Citizen Kane," who is clearly based on William Randolph Hearst, then the writer can know with great precision everything about them, every secret, every private thought, every hidden failing, and act on them without hesitation.  I never have to ask myself, "was the Chief of Police in Panama City Florida in 1967 a crook or a straight-shooter?  The Chief of Police in Panorama City is a corrupt bad guy, representative of other corrupt lawmen and politicians of the period, if not in that exact place and time.

But you mentioned restrictions in making my fictional setting.  I can't think of many.  In fact, it was very liberating in many ways.  Like you said, I want to know where everything in Panorama Beach is, to the extent that the reader should eventually feel like if they were there, they could get in a car and find their way around based on my descriptions.  I have a map, which continues to be refined as I advance the series, so I can keep it all straight. 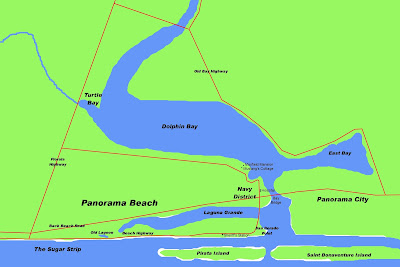 If you look at a map of the Panama City/Panama City Beach area, you'll find a lot of similarities.  But for the sake of clarity, I simplified a lot of things, cleaned up coastlines, and the big change, Panama City Beach is on a spit of land that runs from the northwest diagonally to the southeast.  Just for clarity's sake, Panorama Beach in on a spit that runs east-west, with most of the major roads running the same direction, and cross streets are mostly north-south.  It saves confusion for both me and the reader.

How about Keyhole Bay.  Do you have any kind of map?  I know you've at least worked out some of the overall geography.  And it's interesting how the central body of water evolved from the inland, almost perfectly circular lake in Defuniak Springs to the keyhole shaped bay that the town is now named after.

CHRISTY:  I do have a map, although it isn't as well-developed (or attractive) as yours.  Mine is a just a pencil sketch, and you know I'm not an artist!  More important, for my stories, is to know where all the neighboring shops and things are.  A great deal of the map is devoted to laying out the main drag of Keyhole Bay, figuring out who Glory's neighbors are.  One of the other things I spent a lot of time on was the actual layout of Glory's apartment over the store.  A lot of scenes take place there, and I needed to know where everything is in her home.  The same goes for her friends' homes, and her shop.

Moving from DeFuniak Springs was an easy decision.  I still want to use DeFuniak someday as a setting for historical fiction (back to those ladies in hats!), but I also wanted a fictional town for my series, and wanted it to be reasonably close to a larger city.  I spent a lot of time looking at the map of the panhandle before I made my decision.

And while there are lots of limitations from the setting, it does allow me the freedom to create characters-some of them quite colorful-without inviting comparison to real people.


NEXT: Christy and Steve talk about the colorful characters, and where they come from.