What's In A Name? 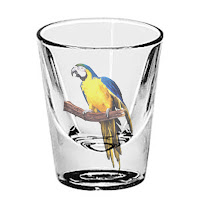 Just when you think you have everything set up, someone comes along and knocks something down.  Sometimes that's a Bad Thing, sometimes it's a Good Thing.  And sometimes it's just a Thing.

For instance, this week at the day job has been insane.  I've been covering some vacation time in my department, which means I have spent several nights at work - but not in a row.  Oh no, that would be too easy!  Instead I've been mixing up night shifts and day shifts.  And that is kind of a Bad Thing.

On the other hand, I've been able to get back on schedule with visiting the gym, which means I am getting at least 30 minutes a day of cardio workout.  That is a Good Thing.

Then there's the change for Murder In a Shot Glass, which is just A Thing - though I think it actually deserves to be called a Good Thing.  The change is the title - as of this week we have officially re-titled the book MURDER BUYS A T-SHIRT.

The change was suggested by the publisher, and this is where the story gets a tad strange.  You see, when I first proposed the Haunted Gift Shop series, and gave the publisher a proposal for three books, I had a different story as the first book.  The title of that story was Murder Buys A T-Shirt.  After some discussion we decided that a different story was a better place to start, and we decided to start with the story I had titled Murder In A Shot Glass.

But when the book was presented at a meeting with some of the people who will make the magic happen - you know, give it a cover, and the cover copy, and the copy for the catalog, and all those things that will make droves of people actually buy the book - they weren't thrilled wtih the title.

No one has said exactly, but I can guess at least one of the reasons.  This is a cozy mystery, with all the cozy sensibilities.  Does Shot Glass say cozy?  Or does it say noir?  It sound more like noir to me, and while that's a genre I like, it isn't what I'm writing.  But T-Shirt?  That's a cozy title for sure.

So Murder Buys a T-Shirt is the new title of the first Christy Fifield mystery in the Haunted Gift Shop series.  And I'm happy with it.  In fact, the more I think about it, the more I prefer it to Murder in a Shot Glass.

There are other titles in the Haunted Gift Shop series - Murder In a Snow Globe, Murder Sends a Postcard, Murder Wants a Cracker - but I'm convinced that Murder in a Shot Glass isn't a cozy title.

But one of these days I will find the noir-ish story that goes with that title.  And then there will be a book called Murder in a Shot Glass.
Posted by Chris at 4:33 PM No comments: