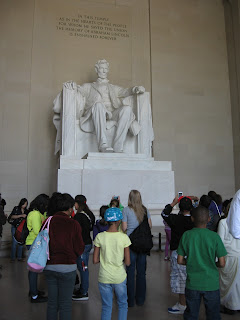 I watched the Presidential inauguration today.  No matter who you support politically, the ceremony itself and the surrounding festivities appeal to something in each of us.  It shows our country making a peaceful transfer of power, or reaffirming our trust in those already in power.  It resonates with each of us in one way or another.

Today, as I watched from the other side of the continent, I was reminded how much I loved my trip to Washington last spring, what a wonderful time I had with my mother and sister.  I saw places we had been, things we had seen together, and I could not help thinking how much Mom would have loved watching and pointing to places she'd been.  She had a wonderful time on that trip, and I am grateful we had that week together.

I was also reminded what a lovely city Washington is, how much I enjoyed my last visit, and why I want to go back.  I want to take my husband and show him the things I shared with Mom and Jeri, the places we saw and the things we did.

Malice Domestic gives me another reason to return to DC, but this year the timing is not quite right.  If I get to go, it will be just for the weekend with no time for sightseeing or playing tourist.  No time for the wonderful restaurants I discovered, or the monuments I missed.  It would mean a cross-country round-trip on a four-day weekend-or three days if I can find an overnight flight that would get me into DC early enough on Friday.

So this year I won't get to visit DC with Steve, but I hope it won't be too long before we make the trip together.  I hope we can have enough time to explore the things we want to, but I have a hunch that is going to take several trips.

I'm willing to make that sacrifice!
Posted by Chris at 3:55 PM 1 comment:

A New Year, and a New Release

2012 is finally a fading image in my rear view mirror.  It's been a tough year, maybe the toughest year I have ever faced.  But today, with the arrival of 2013 I am able to put the old year behind me, and look forward to the new.  Sure, there will be challenges, and I am not 100% just yet, but I am much better than I was a month ago, and miles better than the month before that.  On the 10th of December last year (man, am I glad to be able to say that!) the wound care facility declared me healed, and officially released me from all follow-up care.  Much as I appreciated all they did, I was just as glad to say good-bye.  It was a friendly break-up though, and I took them some lovely parting gifts.


The other good news today is the release of Murder Hooks a Mermaid, the second book in the Haunted Gift Shop series, along with my friend Julie Hyzy's Fonduing Fathers (Thanks, Julie, for the great review posted above).  Here's the cover blurb:

Nestled in Keyhole Bay, Florida, Glory Martine’s souvenir shop, Southern Treasures, is supposed to trap tourists—not ghosts. But a possessed parrot may be just what Glory needs to solve a murder...


Inheriting her great-uncle Louis’s bayside souvenir shop should have been a breeze for Glory. Instead it’s been one headache after another—with a lot of them generated by Bluebeard, a parrot with a mouth like a sailor and a personality a lot like her late great-uncle. But Glory’s troubles pale in comparison to those of her best friend Karen, whose ex may still have the personalized key chain to her heart, but whose brother-in-law is about to get locked up.
A diver has been found with a gaff hook in his chest, and Karen turns to Glory to help get her brother-in-law off the hook for his murder. But casting the net for the real killer won’t be easy. Glory and Bluebeard are about to find out that the secrets in Keyhole Bay run deeper than anyone ever imagined…


Show More
Show Less
Yep, we get to know Karen's ex, who made a cameo appearance in Murder Buys a T-Shirt, as well as his troublesome brother.  There's more Bluebeard, and more Jake, and especially more of Sly and Bobo.  I didn't know those last two were going to turn into such important characters when I started this series, but once they showed up I knew they had a story to tell.  (And there's also more of Sly's story coming January 15th at Dru's Book Musings.)

I am currently working like mad on Book 3, with a working title of Murder Sends a Postcard, which should be out late this year (Yay, 2013!).  As always, if you want a signed copy of any of my books you can contact my local booksellers: North by Northwest Books and Antiques,  or Bob's Beach Books.
Posted by Chris at 12:41 AM No comments: