Last week Penguin and Amazon reached an agreement about eBook pricing for the Kindle.  Now why, you ask, is that important to me?  Well, I'll tell you.

During the negotiations, all of Penguin's new release were not available for Kindle.  Anything that was already available remained available, but nothing new was added.  This meant that LEAD PIPE CINCH, which released the first week of April, didn't have a Kindle edition.

So, when I heard about the settlement I breathed a sigh of relief.  But it took a few days for the books to get through the posting process and show up on Amazon.

Last night LEAD PIPE finally appeared in Kindle form, making this writer very happy!!  For those of you who were wanted a Kindle edition, you can now read Georgie's continuing adventures.

And follow Georgie on Twitter, where she will be reporting on her Road Trip to Reno.  Take a peek at the tweets in the sidebar, then follow #Rd2Reno and @sinktrap for the latest news from Georgie!
Posted by Chris at 12:44 PM 1 comment:

Georgie’s exams are past (or they will be when you get to read DRIP DEAD in February), and she’s ready to celebrate, so we’re taking her on a road trip to Reno!


There’s a trade show in June, which is her justification for the trip. But the Beetle isn’t a good choice for a road trip, and she can't drive the 'Vette. Her solution? Invite Sue along with her dog-friendly SUV. 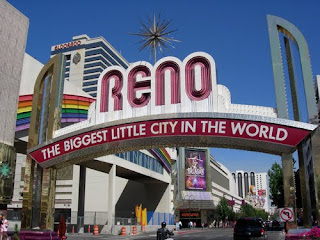 But any trip with Georgie won’t be free of complications, and this is no exception. So get ready to follow her tweets from the road as she and Sue discover lost property, hidden agendas, shady characters, and maybe save the day for one of her new-found friends.
Just follow #Rd2Reno on Twitter, or Georgie’s new handle @sinktrap, for Georgie’s messages from the road to Reno. Feel free to join in the conversation, as Georgie and Sue try to track down the bad guys before their vacation time runs out!
And, as an added bonus, if you send me your address, Georgie will send you a postcard from Reno! Just email Christy@ChristyEvans.com with “Road to Reno” in your subject line, and include your name and complete mailing address. Around the middle of June, Georgie will send postcards from Reno to all her fans.
And who knows what other treats, tricks, and goodies will appear along the way!
Posted by Chris at 12:33 PM 1 comment:

Life Is Full of Mystery

Guest blogger Paty Jager finds a little bit of mystery in everyday life.  As an honest-to-god ranch wife in the modern West, she writes fascinating tales of the Old West, including a forthcoming paranormal series.
Wife, mother, grandmother, and the one who cleans pens and delivers the hay; award winning author Paty Jager has not only brought her husband of thirty years to maturity, but four children and over a hundred head of cattle and swine. She not only writes the western lifestyle, she lives it.

Every day of our lives has a bit of mystery or intrigue in it. The gas light is blinking in your car. Will you make it to the gas station or have to call someone to either pick you up or bring you gas? You're on your way home from work. What's for dinner? Did you put meat out that morning or will it be something leftover from the night before? Or You've been called to the boss' office. Are you getting a raise or are you getting the boot?

For a writer each unique person we see becomes a puzzle or mystery. We wonder about their occupation, their background, their family life. We invent lives for them and eventually use them in a story.

It is these mysteries and our inquiring minds that bring forth books.
My first published book was inspired by thoughts of—what if an accident prone woman pretending to be a young man was made Marshal of a small town? While the story is a historical western romance there is mystery woven throughout the book. Is the Mayor really what he seems; is the hero a hero or an outlaw? What happened in the hero's past? Will the heroine keep her identity a secret when it matters most?
The first contemporary western I wrote started after I heard on the radio about a youngster who ordered items over the internet with their parent's credit cards and the parents didn’t know until the items arrived at their home. A mystery. My book started with a nanny showing up to start a job and the ranch owner not having a clue why she was there because his preteen daughter and a neighbor ordered the nanny over the internet. Mystery- Does he let her stay or send her packing? Why did she pick a remote ranch to be a nanny? Why does he not want anything to do with a woman? Why does he need a nanny? All these mysteries are solved in the book.
I enjoy reading mysteries and I enjoy incorporating mystery into the stories I write. What was a book you read that wasn't categorized as a mystery but it had elements of mystery within the pages?


Paty has four historical western romance novels available through The Wild Rose Press and one contemporary western, which won the 2008 Best Contemporary Romance EPPIE. In June her fifth historical western, Doctor in Petticoats, will be released and her first book of a historical paranormal trilogy, Spirit of the Mountain, will be released in August. To learn more about Paty, her books, and to enter her website contest go to http://www.patyjager.net/ or visit her blog at http://www.patyjager.blogspot.com/

Christy, thank you for having me here today. I enjoy Georgiana Neverall and the interesting characters that keep her company.
Posted by Chris at 12:06 AM 6 comments:

Back From The Dead 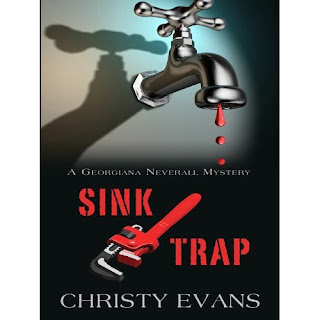 … or at least that’s how it feels! The last month has been a whirlwind in both good and bad ways, and I am just beginning to feel like I can draw breath again.
First, I found out that SINK TRAP is being released in Large Print format, and it has a new cover.
Is that just a fine cover? I love it - expecially the wrench, which looks exactly like the cool gift-wrench, courtesy of the incredible Cindie Geddes, that now hangs on my office wall!

Then there was the release of LEAD PIPE CINCH, which was wonderful. I got to sign at North by Northwest again – always fun – and then two weeks later at Murder by the Book in Portland.
MBTB is a great store, and I want to talk about them at length, but this post is just a catch-up with a tease or three of things to come.
Unfortunately, just before the signing at MBTB, I contracted an infection that slammed me into bed for three days with a fever of 103 and some exceedingly strange and vivid dreams. Massive doses of antibiotics got things under control, and I was at least able to make the signing. But the whole business left me very tired and weak. It has taken a month just for me to get back on my feet. Especially when I threw in a cross-country trip in the middle!
At the end of April I flew to Arlington, VA, for Malice Domestic, an awesome collection of readers and writers focused on cozy mysteries. I met other authors, readers, fans of Georgie (!), editors, and the amazing organizers of the conference. Which is another story I’d like to tell.

And throughout all the turmoil I’ve been working on three secret projects that I hope to be able to talk about soon. (See, I told you there was a tease!) All three are still in the “maybe” category, and I don’t want to jinx anything, so all I can say is that there is the potential for good news in the coming weeks.

Let’s all keep our fingers crossed! And if you haven’t read LEAD PIPE CINCH yet, go find a copy – readers are telling me they liked it even better than SINK TRAP!
Posted by Chris at 2:50 PM 2 comments: