With all the Southern cooking going on around our house as research for the Haunted Gift Shop series (hey, it makes a good excuse!), I am constantly picking the Official Taster's brain for ideas.  I want to know what dishes he remembers from his childhood, the things his mother, grandmother, aunts, friends, and neighbors cooked.

One evening recently, he started telling me about a cookie his Mema used to make.  He couldn't remember what she called them, but as he talked, I realized he was describing what I knew as a Russian Tea Cake.  Curious, I called on my Google-fu and started looking for recipes and history.  What I found was a basic shortbread cookie with nuts added, and many, many names.

Online, I found Russian Tea Cakes, certainly.  I also found Southern Butterballs, Viennese Crescents (though with a variation in shape), Biscochitos,  Kourambiethes, Moldy Mice, Rohlichky, and Mexican Wedding Cookies.  At work, I offered several people samples, and asked what name they knew them by.  My boss, who grew up in Pennsylvania, called them Italian Wedding Cookies.  Another friend said they were Mexican Wedding Cakes, and a couple Mexican friends identified them as Polvorones.  Intrigued, I went back to online searches, and found Polvorones, with the speculation that the name was derived from the word "polvo," meaning dust, or powder.  Other friends called them simply Wedding Cookies.

I found versions with pecans, hazelnuts, walnuts, almonds, and poppy seeds.  Some recipes called for an egg, others did not.  There were variations with all butter, all lard, or a combination of the two.  The ratio of flour and sugar to ground nuts varied from 4:1 to 1:1.  Some had vanilla, some cinnamon, some chocolate, and one included orange zest.  Polvorones are said to date to 16th century Spain, with several regions claiming ownership, and some references claim the Spanish were introduced to them from Medieval Arab cuisine.

Of course I had to make a batch, which the Official Taster pronounced good, but not exactly the same as Mema's.  However, there are dozens of recipes for every one of the many names, so I'll keep experimenting until I find that magic combination that perfectly matches his recollection.

Making the cookies:
I started by toasting the pecans.  I have a stash of very good pecans in my freezer, thanks to the generosity of my mother- and father-in-law, who harvested them from their trees and shipped them to us.  I placed a single layer on a cookie sheet in a 350 degree oven for about five minutes, then let them cool.  This richens the flavor and helps reduce the tendency to turn into paste in the food processor.  When they were cooled, I put them in the food processor with a tablespoon or so of flour (another trick to help you get chopped, not pureed, nuts) and pulsed it until the nuts were finely chopped.


With the nuts ready, I measured the flour, powdered sugar,and vanilla, and softened two sticks of butter.  These are very rich, though they don't have a lot of sugar; the flavor comes from the butter and the nuts. 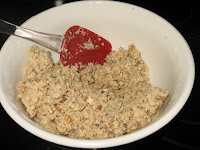 The butter should be at room temperature, soft enough to work.  The dough can be mixed by hand (which I did) but a stand mixer is well-suited to this dough.  If the butter isn't soft enough, give it a few seconds in the microwave.
Mix the flour, powdered sugar, nuts, and vanilla into the butter, just until it forms a ball in the bowl.  You want the dough to hold together, but don't overmix.  Refrigerate the dough for an hour or so, in order to make it easier to handle, then form it into small balls on an ungreased cookie sheet.


Now comes the fun part.  Let the cookies cool for a couple minutes on the baking sheet, then roll them in powdered sugar.As each cookie is rolled in the sugar, place it on a cooling rack.  The sugar will cling to the hot cookies, but it will tend to melt into them because they are still warm.  That's just fine. 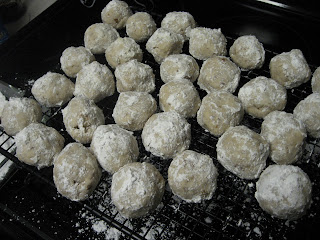 Resist the temptation to nibble, and let the cookies cool.  Because once they are cool, you are going to give them another coat of powdered sugar.  You can also sift powdered sugar over them, but I like to roll them, making sure the entire surface of the cookie has a coating of soft white.

After the second coat of sugar, the cookies are ready to be packed in an airtight container, and enjoyed for several days, or weeks.  As if there will be any left that long!

Mix dry ingredients into softened butter, along with the vanilla.  Stir, or mix at low speed on stand mixer.  When the dough forms a ball in the bowl place it in the refrigerator for an hour.  The cold dough will be easier to handle.

Preheat oven to 350 degrees.  Remove dough from refrigerator and roll into small balls, about the size of a walnut.  Place them about an inch apart on an ungreased cookie sheet, and bake for 10-12 minutes, until they turn light gold.  Remove from oven and allow to cool on the cookie sheet for a couple minutes.