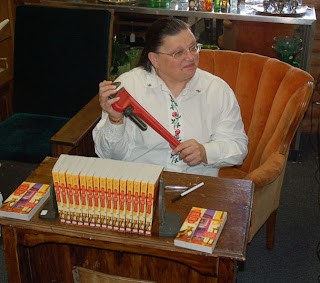 Christy Evans is a mystery pseudonym used by northwest writer Christina F. York.  Chris/Christy also writes under other names, including her own and Christy Fifield, depending on the genre and series.  Chris has never met a genre she doesn't like, and has published mystery, romance, adventure, fantasy and science fiction.
Mystery has always been her favorite though, since her great uncle introduced her to the "Perry Mason" books when she was a child.  She read each new book as he finished  with it and passed it on.  The die was cast, she either had to become a lawyer, or a mystery writer.  As fate would have it, mystery writer won.
Chris lives on Oregon's Pacific shore with her writer-husband J. Steven York and two cats, Oz, and "Bad Agent" Sydney T. Cat.