As many of you know, I suffered a serious illness a couple years ago, and spent an extended time in the hospital.  And, as I have talked about before, my husband read aloud to me when I was too weak to hold a book or focus enough to read.

All the nurses on my floor knew him - at 6'6" he stands out - but he was identified more by the way he treated me and looked after me during those weeks.  Especially the reading.  Sometimes he would catch a nurse lingering by the door, listening as he read.  They told me later that he was a keeper, they didn't often see that kind of devotion.  But I already knew that.

What those nurses didn't know was that this wasn't the first time he'd read to me.  In the early years of our marriage we settled the issue of who got to read Dave Barry's Sunday column first with an elegant solution: he got the paper first, but he read the column aloud - at least he did when he wasn't giggling madly over something Barry wrote.  (Confession time: I was usually in hysterics, too.)

Over the years we've been together (32 and counting) we have often read to each other.  I would find a passage especially amusing or amazing or enlightening, and I would read it to him.  He would do the same to me.

That's how he finally read the Harry Potter series.  We were on a car trip, I read him an early passage in Sorcerer's Stone (I was re-reading books 1-6 in preparation for the release of 7.  Yes, I am a nerd!) and he was hooked.  We traded off reading and driving the rest of the trip, and he dove into the remaining books as soon as we got home.

Reading to each other on car trips has become something of a tradition.  We've read thrillers and mysteries and science fiction, but primarily we read non-fiction.  And I look forward to those long hours on the road, listening to my dear husband read me something I might not have chosen on my own.  I hope he feels the same. 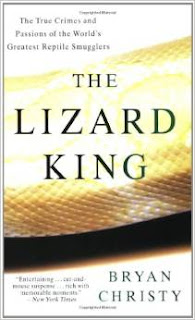 All of this is background, leading up to a discussion of the book we read on our last road trip.  Steve found it in Goodwill a few weeks back, we read a few pages, and decided it would be perfect for our upcoming drive to Reno.  It definitely was!

The book is The Lizard King by Bryan Christy.  Set in Florida (just like my Haunted Souvenir Shop series!) Lizard King tells the story of a dedicated Fish and Wildlife agent and the suspected smugglers that become his obsession.

Here's what Amazon.com's reviewer had to say:


Reptile smuggling is big business, and in his book debut, Brian Christy mounts an intense and highly readable investigation into this unique black market's surprising depths. Besides the reptiles themselves, this exciting narrative investigation focuses on two main protagonists: Michael Van Nostrand, a notorious dealer; and Chip Bepler, the Fish and Wildlife Service agent whose single-minded aim was to bring the former to justice. --Jason Kirk

While the Publisher's Weekly review (also on the Amazon/com site) has some issues with the book, we didn't find the narrative disorienting, instead enjoying the fascinating tale of cops and robbers.  It's like The Sopranos, but with snakes and lizards instead of arson, drugs, and murder - though I'm not saying you won't find some of those things in The Lizard King!
This one gets two thumbs up from the York Writers! And just maybe we will see some of those things show up in future Haunted Gift Shop stories...